Your Club. Your Community.

Kick off is 2pm.  To make that clear to some……The ref will blow his whistle to start the game at 2pm.  So that means being here at 1pm.

So once again….2pm KICK OFF

Rivalry between Lynwood and Curtin started in 2011 and has continued on in their first meet up of the 2017 campaign.

Curtin Uni decked out in orange and Lynwood in yellow caused a bit of controversy as Curtin Uni’s Captain complained about the similar playing strip.

Quickwit from Coach Quy, he responded with, “Get over it fuckhead. It’s two different colours, if the girls can play like this then what’s the problem?”

Referee Gary, didn’t like the response and told us to change strips, however, Lynwood didn’t have one and he ended up giving in and started the match. Lynwood 1, Curtin 0.

The game started like any other, Sexy Footy and Friendly Banter. Curtin were caught running after the ball as Lynwood dominated possession. With the midfield three of Higgins, Hew and Iscel, the Socialona Triangle was unstoppable. Lynwood broke the deadlock through Summer Signing, Tony Ton, who showed his worth and experience as he asked the keeper what sauce he’d like as he fed him a delightful chip.

Tony doubled his tally shortly after with a smooth turn and shoot. Curtin’s captain wasn’t happy and complained that it was because of a clash of kits and tried to persuade the ref to forfeit the game but the ref ignored his crying.

Just before half time Curtin were awarded a free kick. Hitting the left post and coming back into play, Lynwood players failed to follow in and Hornsby managed a brilliant double save but couldn’t keep out the third. 2-1 half time.

Second half kicked off and Lynwood turned on the oven, completing 24 passes before London outpaced their back four and rounded the keeper. Curtin were not happy and starting going in late on the Lynwood players which only made their desire to spank such naughty boys even greater.

Refreshed from his break Tony Ton came back on and caused mayhem as he scored another two, taking his goal tally to 6 goals in 3 games. Lynwood continued to make their opposition work as they simply kept the ball as if it was a Tuesday night at Hossack Reserve. This caused a lot of frustration which led to Curtin’s winger to lash out at London. Not happy with the challenge, London stood up pushed the Curtin player and traded insults which led to a double send off.

Shocked at the decision Lynwood continued to toyed with their opponents until the final whistle.

Please join us by supporting our first Junior Event for 2017:

Free Hot Dog and drink for players who participate.

Nitin, Nathen,Dave Williams, Raj, gary, rudi, tim, Andy, Ronnie, Fidel, Marc, Phil, Bigun, Adil, stevie and new recruit keeper TC as there is no one else and I have my own gloves and keeper top and I just wanna be part of it because I don’t want to be left out.

Be at Wanneroo for 2pm please. 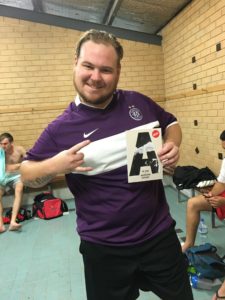 Fresh sand pits on the pitch, Garreth being a hour late, Michael having his pre game shit, if this doesn’t scream Football Is Back… I don’t know what does…

Lynwood United took on former amateur side, Sutherlands Park, who have dominated the lower social leagues. However Lynwood are eager to add onto their current record of 19 unbeaten games at home since 2014 and continue to make Hossack Reserve a fortress.

The social boys stuck to their game play of sexy footy and friendly banter which saw them score two quick goals in the first 15 minutes. A cool finish from 17 year old youngster, Tommy Ton, and an acrobatic bicycle from older brother, Tony Ton.

With 5 minutes to go, Coach Quy subbed himself on upfront to help produce the final goal of the game from a calm 1 on 1 finish by London. With no goals in the second half until the substitution it was an obvious game changer.

Great start by the boys as they added onto their unbeaten run and claimed three points.

The following link will take you to any information you may need regarding the MiniRoos, from under 5 to under 12.  This includes links to fixtures and also at the bottom of the linked page, a list of rules for each of the age groups.

On the 31st March over 110 players from our under 6’s right up to the under 16’s played in some fundraiser matches to raise money for the Children’s Leukaemia and Cancer Foundation.  Nomination money was paid from the players pocket money and raised over a $1000, a superb effort.  The matches were set up in age groups (6/7, 8/9,10/11 and intermediate) with “Its going to get Messi” winning the Intermediate comp, “All stars” taking out the 10/11, 8/9’s it was “The Blues” and of course in the little tackers everyone was a winner with gifts donated by Football West.  The overall Winner based on points per game was The Blues who get their name engraved on the Charity Shield.  But the night was about fun and raising money and there was ample of that.  A big thank you to the committee, coaches and parent helpers who made the night possible. 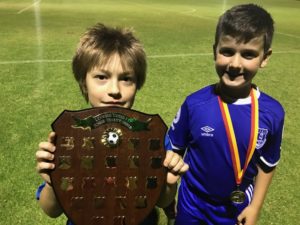 Two members from the overall winners “The Blues”.  Highlighting why its always a good idea to stay for the presentations

Players, Members, Coaches and Parents are all welcome to attend Committee meetings at any time. Minutes will be made available by request only and will not be uploaded to the website. Committee Meetings are held on the first Monday of every month.

Theme by Anders Noren — Up ↑